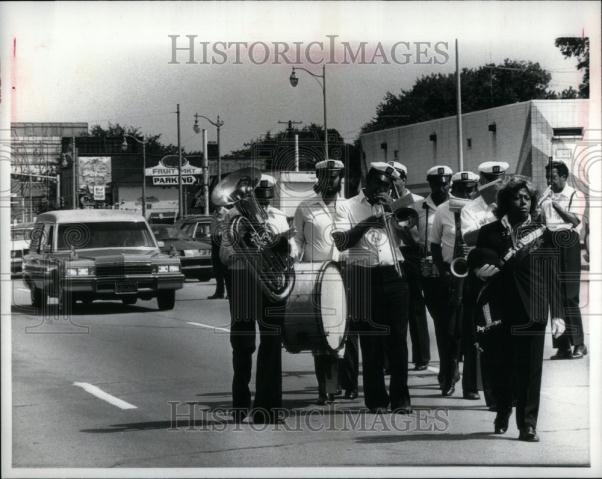 The Second Line Has Become The Mainline

It used to be that the second line stood for those who were in the 2nd part of the caravan behind the family leaving the funeral home or church to send the body off. Now, it’s all about the second line. In fact, they don’t call them funerals anymore, they say, “We havin’ a Second Line!” It has all become a big party. When I first heard of what they were going to do with Uncle Lionel’s body, I was taken aback, but I felt slightly comforted at the notion that there was an announcement for no photography to be allowed. Then, the next thing I see is a photograph on NOLA.com of Unc’s deceased body propped upright like a figure in a wax museum. I don’t know if this was Unc’s wish. If it was, so be it, but the event and the coverage that accompanied his memorial is evidence of how the New Orleans tradition has devolved into a sideshow.

Since when has it been OK to post photos of a deceased musician all over the place? I guess the advent of the Internet has served to desensitize us to the fact that we’re dealing with human beings like avatars on a screen. Life has become The Matrix.

The journalist of Uncle Lionel’s obit focused solely on the fact that his body was standing up. Nothing about the man or musician in the whole piece. At least the journalist is consistent in that he disrespects artists living and dead alike.

It also went on about how fellow morticians wanted to know the “trade secrets” for arranging Lionel Batiste’s body upright and recounts of opportunists outside of the procession selling “Uncle Lionel” memorabilia. Really, people? Is this what it’s come to?

Y’all Doin’ Too Much

Uncle Lionel was a “character,” but he was not a character. He was a real person. He wasn’t a brass band cap, or a wrist watch on his hand, or any other personal affect. He was a man. A man with a family. A pillar of the community who deserves our respect. We no longer respect our elders as we should, neither in life or in passing. I remember when we used to send our soldiers off with respect. I sound like an old man, but it wasn’t that long ago. I remember when we had a solemn service for our elders, now it’s just a spectacle filled with paparazzi and onlookers eating barbecue who could care less. SMS = Sad, miserable situation . . .

New Orleans Is Becoming A Caricature Of Its Former Self

We have always celebrated the passing of our loved ones. It’s a beautiful tradition. I know traditions evolve, but certain foundational aspects should remain a constant. Water adapts and has many forms, but it’s still water at its essence. New Orleans is a city of dichotomies. Here in the Crescent, we rock birth and death in the cradle of our arms. We recognize that every death is a birth; the beginning of a new journey. We mourn the passing of our loved ones, cut the body loose, and send our children home on a happy note. But where’s the balance? This ‘laissez-faire,’ ‘le bon ton roule’ disposition has begun to serve as a detriment to the things we should hold dear.

I remember when my dad passed, a very dear friend posted a video of my father’s unauthorized “memorial” on their Facebook page. When I saw that, I was crushed. Not so much at the fact of the memorial, but at the participants who largely forgot that a family has just lost someone.

Late night at the Walgreen’s on St. Charles, I bumped into one of the city’s Grand Marshalls right after my dad passed and was amazed at how they could make my father’s death all about how they were going to upstage the other Grand Marshalls at the memorial. How dare they make my father’s death about them buckjumping at a second line. This person was totally numb to the fact that I had just lost my father and my dearest friend. I can tell you countless stories of other family members who have suffered similar disregard, but will spare you for the moment.

There is a respectful way to celebrate the deceased. We’ve all but forgotten that.

It used to be that we would talk about the tourists who would come to our city with the express purpose of indulging in as much debauchery as possible. We’ve now become those tourists in our own city. Every day is Mardi Gras. Any excuse to show your tits. Don’t get me wrong, I love tits, but they mean nothing without the people they’re connected to.

We’ve become That Place. We are now an episode in our own show. Celebrities love to come to live in New Orleans because it’s one of the few places they can live in anonymity. No one cares about a Hollywood star here because the cat who hangs outside the corner grocery store is an icon. That used to be a beautiful thing until it distorted itself. Now you got cats who hang outside the store on the corner with hopes of fame, or the cat who will never leave that corner because of his established stardom.

No one in New Orleans goes to see a show anymore, they go to BE the show. #mfcomn

So What’s The Answer?

One of the biggest things that has plagued New Orleans is its history. There has always been a large contingency of folks here who believe that if New Orleans becomes a forward-thinking city, it will lose its character. News flash folks: it already has. It has been on a slow, steady demise over the years, and the flood that Katrina brought damn near finished the job. I though at least with the flood we would have a clean slate. A chance to fearlessly start over since, in many ways, all was lost so we had nothing to lose. I feel we missed that opportunity, but we still have a chance. This is a city that embraces birth and death, so why can’t we embrace tradition and move forward, as well?

These are not mutually exclusive ideals.

They can coexist in the same place without either losing its integrity.

I am not old. I am still very much a young man, but I find myself having to speak to things that most folks don’t seem to want to say. I get tired of always having to be the one to speak out. It is not what I set out to do in this life. In fact, I’m a very shy person, but I cannot be silent and allow what I see happening in our culture go unchecked. I would love to shut-up and just play the trumpet, but somebody needs to say something, and oftentimes, I find it being me. As Rufus Wainwright says in his piece Jericho, “”Guess I’ll have to put my trumpet back in the case and get behind this here canon covered in lace.”

It’s All About Love

Respect is love and love is respect. It’s just that simple. That is The Answer.