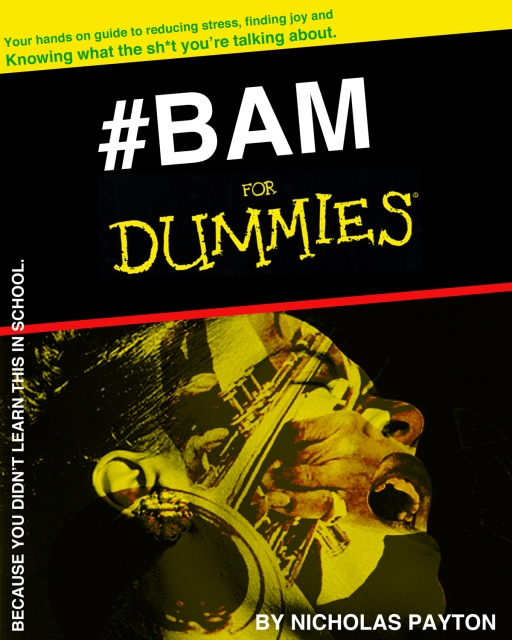 Many folks have asked and continue to ask what is #BAM. Most simply, #BAM is just an acronymic hashtag for Black American Music. For those who don’t know what a hashtag is: A hashtag “#” is a label on Twitter to make searching under a title or grouping subjects easier, but it’s obviously been adopted in the popular lexicon to give emphasis to a word or phrase and as a sign of unity. What exactly is Black American Music, you might ask? I can see how many are confused and perhaps feel excluded from the proposal of Black American Music. Please allow me to explain…

On November 27th, I made a blog entry that was culled from a series of tweets (posts on Twitter) that was subsequently titled “On Why Jazz Isn’t Cool Anymore.” Unbeknownst to me, this precipitated a firestorm of events to take place, including–but not limited to—a series of heated exchanges between artists, musicians, promoters, writers, industry folk and fans alike. Some arguments were more respectful than others, but always impassioned, nonetheless.

If nothing else, it exposed many latent issues that lurk just beneath the surface of Black culture as it relates to mainstream America and Eurocentric ideology overall.

What’s In A Label?

Labels are important. Labels do matter. It’s when we pretend they don’t that it becomes OK to call a 9-year-old girl the “C” word. Nothing is intrinsically wrong with labels. It’s when labels are misappropriated and used as tools of tyranny that it becomes problematic. Labels are words and words have energy.

Words are currency. Action is gold.

It is in coded language that we find forces that serve to sustain the status-quo. One must be smart enough to see the subtle ways in which we say things that affect our ability to break free from certain negative thought patterns. Language is powerful. It can create spells and it can break them. Religion and government are primarily constructed around words.

Words have the power to free one’s soul, but independence is more than being free. It’s using your freedom to provide a platform by which like-minded souls can free themselves.

Independence is not an individual cause. It is a societal shift. A movement.

It’s more than just a name change. It’s about Black people not being properly recognized and respected in mainstream culture. Ending slavery and Jim Crow was/is not enough. Marginalization of Blacks has been the theme for centuries. It started with Blacks being written out of the history of the civilization of this world.

“The ancient Egyptians were Negroes. The moral fruit of their civilization is to be counted among the assets of the Black world. Instead of presenting itself to history as an insolvent debtor, that Black world is the very initiator of the “western” civilization flaunted before our eyes today. Pythagorean mathematics, the theory of the four elements of Thales of Miletus, Epicurean materialism, Platonic idealism, Judaism, Islam, and modern science are rooted in Egyptian cosmogony and science. One needs only to meditate on Osiris, the redeemer-god, who sacrifices himself, dies, and is resurrected to save mankind, a figure essentially identifiable with Christ.”

The Black American Music Movement is about setting straight what has been knocked out of alignment by mislabeling and marketing strategies.

I’m Not Black, Where Do I Fit In Black American Music?

You should feel no more disconnected from Black American music than non-Cubans feel about playing Cuban music or non-Brazilians about Brazilian music. The term Black American Music just acknowledges the culture from which it sprung forth. You don’t have to be Black to appreciate and play it anymore than you have to be Chinese to cook and eat noodles.

For Those Who are Black and/or Jazz Lovers . . .

The Black American Music Movement doesn’t seek to take Jazz away from you. It’s your choice. There are certainly artists and musics that deserve the JAZZ title, but there is a growing number of artists who wish to shake the stigma of cultural colonialism.

“By and large, jazz always has been like the kind of man you wouldn’t want your daughter to associate with. The word ‘jazz’ has been part of the problem. In the 1920s I used to try to convince Fletcher Henderson that we ought to call what we were doing ‘Negromusic.’ But it’s too late for that now. This music has become so integrated you can’t tell one part from the other so far as color is concerned.”

There has always been a contingency of artists who pushed for Black music. It’s not too late, Duke, we are now in a position to actually do something about it.

This is free. This is not Kickstarter.

I was really hoping it wasn’t true, but I guess it is. I am filled with gratitude for all you have given the world.

I will cherish all the time and info you were gracious enough to share with me and I’m renewing my commitment to preserving the legacy of Black American music you worked so tirelessly to uphold.